Fish This!: Passing it Along

I watched my grandmother’s small, wrinkled fingers reach into the bait bucket. They emerged with a live shrimp grasped firmly, just behind the head. She carefully pushed a hook through the top of the tail and then back through the other direction before handing me my small fishing rod. Smiling down at me with a broad grin, she baited another shrimp for herself and dropped it over the rail using nothing more than a hook tied to a hand line.

As a four-year-old boy, everything about fishing was a mystery. Sometimes my grandmother’s face would get very serious as she retrieved her line hand-over-hand. Her once-baited hook would come back with a fish wriggling on the other end, and her smile would return and everyone would get very happy.

My fishing method was comprised of dropping my bait into the water and immediately reeling it back up. Over and over again. This would frustrate my grandfather who would tell me I needed to wait for a fish to bite. As his irritation grew my grandmother’s smile only got wider.

“Let him fish how he wants!” she would protest in her heavy accent, while winking in my direction.

On one outing, my grandfather lured me away from my fishing pole with a promise of ice cream. He took my hand and led me to snack shop at the end of the pier. By the time we returned, my hands and shirt were covered in melted chocolate. As we approached, my grandmother excitedly motioned for me to hurry.

“You’re getting a bite!” she said, although I didn’t really understand what she meant.

She handed me my fishing pole and I reeled as fast as I could. On the other end was the first fish I ever caught – a tiny, colorful angelfish.

What a feeling! Although I look back on that day and wonder if I truly caught a fish, or my grandmother gave me the gift of catching it by placing it on the hook.

As if it matters either way.

It took a couple of years to catch my next fish, but by this time I could bait my own hook and tie my own knots.

I was fishing with my dad on the same fishing pier. The setting sun painted a bright orange sky. Numerous anglers had their lines in the water. Not one had any luck. Even the opportunistic pelicans were sound asleep on the overhead light posts, fully resigned to the fact that the fish simply weren’t biting.

My dad said, “Keep an eye on my fishing rod. I have to go use the bathroom.”

Less than a minute after walking away, his rod began to twitch. I lifted it up and waited for the fish to swim away with the bait. Then I reared back to set the hook.

My father neglected to tell me that he had turned on his strike indicator, which we and most other fisherman colloquially call a “clicker.” When you engage the clicker, it releases the clutch on the reel so the spool can move freely, allowing a fish to take your bait without pulling your pole into the ocean. It also makes a loud clicking sound as the spool rotates, which lets you know that a fish is biting, even if you’re napping, drinking beer, or a combination of the two.

When I yanked on the fishing rod, the reel’s spool suddenly spun out of control. The fishing line rolled back onto itself repeatedly until it was a monstrosity of tangled Dacron. The clicker rang out like a three-alarm fire, making every angler on the pier think a great white shark had suddenly taken my bait. Everyone whipped around to see a little kid holding an oversized fishing rod adorned with a crow’s nest that would likely take several years to untangle.

There were chuckles, but I didn’t give up.

I threw down the rod and grabbed the free line. I could feel the fish still pulling on the other end. I began to retrieve the line hand-over-hand, just like I’d watched my grandmother do a thousand times before. There was a knot in my stomach. I did not want to lose the fish.

After reeling it all the way to the pier, I hoisted it up and over the rail. It was a good-sized speckled trout – my dad’s favorite fish. I removed the hook, placed the trout on our stringer, tied it to the pier and dropped it back down over the rail. Meanwhile, a crowd of otherwise bored fisherman had gathered. One of them said, “Good work! That’s a nice trout!”

Fishing piers are like small towns, so by the time my dad returned he had already heard that someone caught a quality fish.

“Who caught it?” he asked, and my smile must have given it away because he almost immediately asked to see it.

Making your dad proud is a feeling second only to that of catching a fish.

That trout was the first fish I caught on my own. I remember every fishing “first” I’ve ever experienced, but these memories from childhood are the most vivid. If you ever had an opportunity to go fishing with your dad or grandmother as a child, I bet it’s an experience you remember.

I recently took a young girl named Aria on her first fishing trip. We went to Lower Lake, but the brookies refused to cooperate. The next day I took her and her folks to the Ore Dock. We targeted hungry flounder, which is as close to a sure thing as you can get in Skagway.

It took one cast for Aria to catch her first fish – a small flounder that we all agreed would be best to throw back after taking a photo or two.

I re-baited Aria’s hook and she dropped it over the rail, her mother holding onto her tight from behind. She got another bite almost immediately. Aria’s fishing rod bent over double and she protested that it was difficult to reel. I figured she was simply tired after pulling in two back-to-back fish from the briny depths of the Lynn Canal.

The fish that broke the surface was the mother of all Skagway flounders – a 17-inch-long doormat that easily weighed over 3 pounds. It was the

largest flounder I’ve ever seen caught around here, by a good two inches.

It seemed unlikely I could hoist that slab of meat up onto the dock without the line breaking. The reel wasn’t up to the task, so I pulled it up hand-over-hand until I could carefully swing it over the rail.

That flounder fed the whole family.

There is a lot I could say about this whole experience, but I will merely leave you with one simple piece of advice. 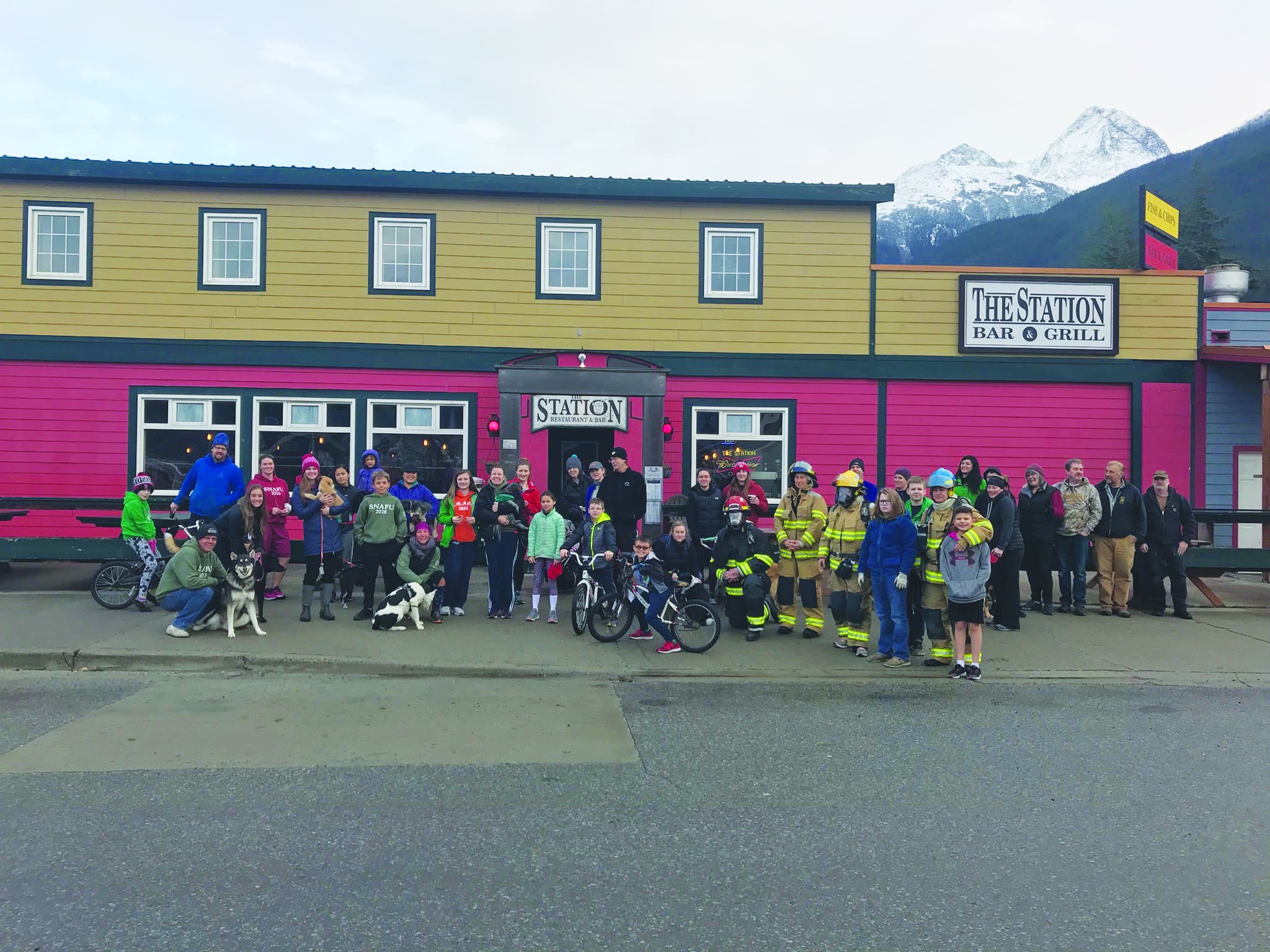