Long live the Easter Bunny, the Tooth Fairy and Santa

I’ve always known the Easter Bunny didn’t lay eggs. That was a no-brainer. But it took me several years to accept that the giant bunny didn’t hide the eggs.

My realization was tough for Dad who loved finding new and challenging hiding places. My siblings and I, like many kids, were given a basket and told how many eggs we could find. I seem to recall that I was always the last to finish. Maybe I was slow, but I like to think I found the most difficult hiding places. Dad liked to think he did, too.

Dad belonged to the  Anchorage Kiwanis Club, so coloring eggs for the annual Easter egg hunt at Goose Lake was a family affair. When we were younger, we never tired, but coloring 30 dozen eggs eventually became a chore. It was kind of cool that we were able to write words like GOLD or BIKE or SLED  to designate prize winning eggs, but other than that, we stuck to coloring the eggs we wanted the Easter Bunny to hide. Dad colored the rest in large batches.

Sometime in my 30s, before I met my husband, I arrived for Easter dinner at my parents home. Dad handed me an egg carton. “There are twelve plastic eggs. All in the living room,” he said.

I started looking. Dad stayed focused, waiting to see which eggs I found first. I’m not sure who enjoyed it most. I had fun looking, but I know he found joy in hiding them for me. My mother was amused watching the two of us do our thing.

While the Easter Bunny myth fell with a bit of emotion, the tooth fairy truth was disclosed in the dark when Dad accidentally swore at a hanger he stepped on as he tried to exchange the tooth for a quarter without waking me. I opened my eyes. Dad said he was just helping the tooth fairy out, but I got the idea.

So with Dad assisting the Easter Bunny and the Tooth Fairy, it only made sense that he was tight with Santa Claus.

Dad was more than tight with Santa, he was a bonafide Santa replica and stand-in. Growing up with your dad as Santa’s go-to guy was cool. We had to keep it a secret in the neighborhood. I remember an afternoon Santa (Dad) walked down the street, crossing yards and handing out candy canes. My sister and I followed along with him feeling proud and important, but we had promised not to tell anyone. Dozens of wide-eyed kids ran alongside him in awe that Santa was on their street. 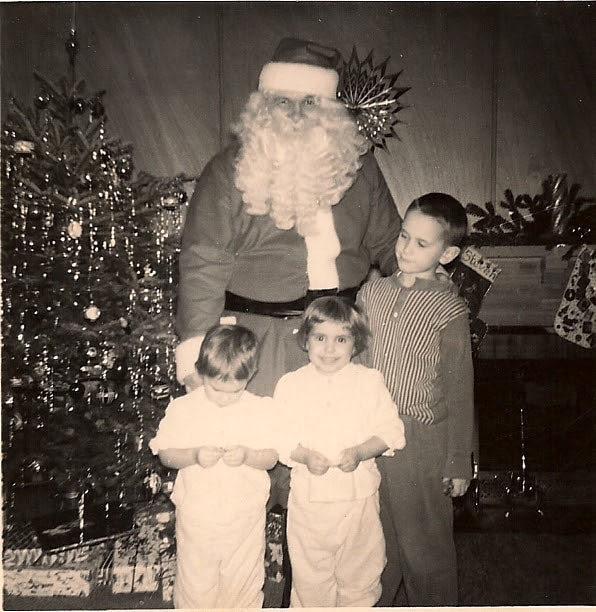 My siblings and I with Santa (Dad) – Photo by Merle Wehmhoff

I was in awe the night Dad saved Santa’s life.

I must have been about six years old when Dad and I were driving home from an evening errand. The car radio blasted an emergency alert. NORAD had detected an object that appeared to be propelled by reindeer. They were scrambling jets to get a better look.

“Daddy! Daddy! It’s Santa Claus! They’re going to shoot down Santa Claus. We have to stop them!” I screamed.

He tried to assure me that it would be fine, but I wasn’t calmed. I knew we lived near an air force base and they would get to Santa quickly.

“Hurry Daddy. Drive faster! We have to stop them.”

We pulled into the driveway and I practically dragged him into the house and to the phone.

Dad picked up the phone and pretended to dial. I hung on every word.

“Yes, general, this is PFC Wehmhoff,” he said, using his rank from WWII. “Yes, my daughter wanted you to know that the unidentified object is Santa. Yes, sir. Thank you, sir. I’ll tell her.”

Dad let me know that they had figured it out and were going to keep the skies clear for him.

A few years later, my first argument that almost turned into tears and fists happened defending Santa in second or third grade. Some kid was telling everyone that Santa wasn’t real. I about lost it.

“I’ve been to his house in North Pole. He’s real!”

I think the volume increased as did the crowd around us. I was furious that this kid was spreading lies. Our teacher finally broke us up.

It wasn’t much later that Mom had to sit me down and break the news. My older brother had known for years, but as long as he kept the secret, he got an extra present from Santa. My younger sister had run across presents in a closet, then saw the same presents under the tree labeled from Santa. As usual, I was the last to figure it out. Actually, I had to be told.

Just because his children were in on it, didn’t stop Dad from spreading cheer at hospitals, children’s homes and occasional private events. Mom made a perfectly-sized, authentic costume for him with Santa glasses and a beard. Dad did the rest. He was a natural. If you needed a Santa, you called George. He walked into events with a bag filled with candy canes and Mandarin oranges. If it was Christmas Eve, the clients left the presents outside the door. He would place them in the bag and the joy of believing was passed on to another generation.

One December, the U.S. Secretary of Interior, our former governor, Wally Hickel, was at home with some bug or flu. Dad decided to swing by as Santa and cheer him up.

He pulled into the Hickel driveway and left his car running. Ermalee greeted him, took him back to see Wally for a good laugh, then Dad headed back outside. As he approached his car he heard two ominous clicks.

“Identify yourself,” a voice commanded.

“Hands above your head.” The guns made another click.

This is a common theme with my father and I — I learned later on that joking with the border patrol was a bad idea. Dad learned the same lesson with the U.S. Secret Service.

Dad told them who he was, why he was there, and said Ermalee could vouch for him.

He stood still in his Santa outfit, hands raised, gun aimed at him in the headlights of his own car while an agent went to the door to verify his story with Ermalee. She did, with some laughter.

It turned out that the agents had been in the back of the house working on a broken garage door. When they came around the corner they saw an unfamiliar car haphazardly parked with the engine running and driver’s door open. Nothin’ happenin’ here.

Dad made sure Santa visited countless children and adults. From nursing homes to children’s homes, from hospitals to private homes, Santa, my Dad, kept the magic alive. He was full of life with a jolly laugh and a memorable twinkle in his eye.

It helped that he had a custom made costume and a deep ho, ho, ho. But what made him real was his ability to look at a child, call them by name and let them believe.

Santa was real and I knew him firsthand.