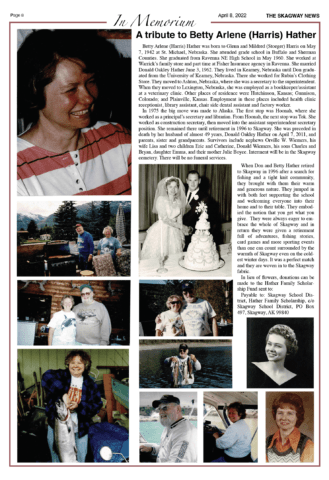 Betty Arlene (Harris) Hather was born to Glenn and Mildred (Stoeger) Harris on May 7, 1942 at St. Michael, Nebraska. She attended grade school in Buffalo and Sherman Counties. She graduated from Ravenna NE High School in May 1960. She worked at Warrick’s family store and part time at Fisher Insurance agency in Ravenna. She married Donald Oakley Hather June 3, 1962. They lived in Kearney, Nebraska until Don graduated from the University of Kearney, Nebraska. There she worked for Rubin’s Clothing Store. They moved to Ashton, Nebraska, where she was a secretary to the superintendent. When they moved to Lexington, Nebraska, she was employed as a bookkeeper/assistant at a veterinary clinic. Other places of residence were Hutchinson, Kansas; Gunnison, Colorado; and Plainville, Kansas. Employment in these places included health clinic receptionist, library assistant, chair side dental assistant and factory worker.

In 1975 the big move was made to Alaska. The first stop was Hoonah, where she worked as a principal’s secretary and librarian. From Hoonah, the next stop was Tok. She worked as construction secretary, then moved into the assistant superintendent secretary position. She remained there until retirement in 1996 to Skagway. She was preceded in death by her husband of almost 49 years, Donald Oakley Hather on April 7, 2011, and parents, sister and grandparents. Survivors include nephews Orville W. Wiemers, his wife Lisa and two children Eric and Catherine, Donald Wiemers, his sons Charles and Bryan, daughter Emma, and their mother Julie Boyce. Interment will be in the Skagway cemetery. There will be no funeral services.

When Don and Betty Hather retired to Skagway in 1996 after a search for fishing and a tight knit community, they brought with them their warm and generous nature. They jumped in with both feet supporting the school and welcoming everyone into their home and to their table. They embodied the notion that you get what you give.  They were always eager to embrace the whole of Skagway and in return they were given a retirement full of adventures, fishing stories, card games and more sporting events than one can count surrounded by the warmth of Skagway even on the coldest winter days. It was a perfect match and they are woven in to the Skagway fabric.

In lieu of flowers, donations can be made to the Hather Family Scholarship Fund.