A new totem pole in Juneau is 22 feet tall, almost 4 feet wide at the base and about 7 to 8 feet wide where Raven and Eagle are. You have to walk around it completely to see all of the elements. Unlike most poles that are carved on one side, the Sealaska Cultural Values totem pole is carved all the way around, a full 360 degrees. According to Sealaska Heritage Institute, there are only three others like it, all in Canada. Now, there’s one in Alaska.

“It’s the fourth one that I know of on the whole Northwest Coast. They’re pretty rare, done within decades of each other. It was the biggest challenge of our career. There’s just so much that goes into the actual carving, the moving, the rolling back and forth. It was a lot more work than I anticipated,” Haida artist Sgwaayaans (TJ Young) said during an interview on Friday.

He and his brother Gidaawaan (Joe Young) carved the Sealaska Cultural Values pole, which was erected May 26, at the entrance of the plaza at Sealaska Heritage Institute’s arts campus in the middle of Downtown Juneau.

It’s made from a red cedar tree that Sgwaayaans estimates was 600 years old. “We counted the rings,” he said. “We had someone sit there and count the rings and use a tack; every 10 years you put a tack. This one was around 600 years old.”

The log from Prince of Wales Island was wide, straight, and had no knots for the first 20 feet; knots can slow the carving process down. “It was a beautiful log. We kind of got spoiled on that one because not all logs are like that,” Sgwaayaans said.

Originally from Hydaburg and now living in Anchorage, Sgwaayaans has been carving for more than 20 years. In that time, he and his brother have carved 15 to 20 full-size totem poles. Most take about three to four months. The Sealaska Cultural Values Pole took close to nine months. With design and all the other work, the project was about a year and a half in the making. When the pole was erected and put together on Thursday, Sgwaayaans felt tremendous relief. “We were able to exhale,” he said.

No matter where a person stood, Worl didn’t want anyone to see the back of the pole.

“The only logical thing that we could do was to have it carved all the way around. At that time, I didn’t even know how rare it was. It’s a whole different ballgame for us.”

The Sealaska Cultural Values totem pole is different in other ways as well. It represents all three tribes of Southeast Alaska – Tlingit, Haida and Tsimshian – and depicts Sealaska’s core cultural values. The values run across all three groups and “contributed to our survival as Native people,” Worl said.

“Even though we are three separate tribes and we speak different languages, we have a common culture. And I keep saying that our cultural similarities are greater than our differences, and that’s because of the wide interaction that we had among our groups,” Worl said.

The three figures at the top of the pole represent the Tlingit, Haida and Tsimshian, and the face of each was carved by a different carver. Tsimshian artist David R. Boxley carved the Tsimshian face, Tlingit artist Rob Mills carved the Tlingit face, and Sgwaayaans carved the Haida face.

Sgwaayaans wants to see more collaboration among Tlingit, Haida and Tsimshian carvers in the future. That’ll help sustain the art and get younger people interested.

“There aren’t as many carvers as there were 100 years ago. That master [artist] apprenticeship got broken somewhere down the line in the early 1900s. Those were kind of the dark ages where everything was getting dismantled. Our culture, the language, the art, the dancing – it was forbidden. And we’re trying to get back to that old master standard as far as the art goes,” Sgwaayaans said.

Sgwaayaans previously spent four years as apprentice under master artist Robert Davidson, who Sgwaayaans consulted with throughout the process of making the pole. And Sgwaayaans and his brother had two apprentices for the Cultural Values pole – Greg Frisby and Andrea Cook, who are both Haida.

The art, he said, is “so beautiful. It’s worth preserving, it’s worth saving, and that’s kind of our mission.” 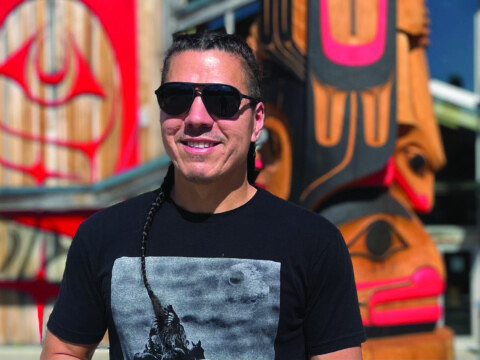 Haida artist Sgwaayaans (TJ Young) stands in front of the Sealaska Cultural Values Totem Pole on May 27, 2022. He and his brother Gidaawaan (Joe Young) carved the pole with the assistance of others. Photo by Lisa Phu/AlaskaBeacon.com

Sgwaayaans and his brother did most of the carving in Hydaburg before the pole was moved to Juneau in late January. The final three months of carving was done at the Sealaska Heritage Arts Campus. It was the first work done in the new building, which is named Atnané Hít: House of art.

The campus, which encompasses approximately 6,000 square feet, houses indoor and outdoor space for artists to make Northwest Coast art pieces, such as totem poles and canoes; classrooms for art programming and instruction in areas such as basketry, textiles and print making; an art library; and space for artists-in-residence and faculty. The covered outdoor area will be used for performances, art markets and public gatherings.

The arts campus is phase two of Sealaska Heritage Institute’s vision to make Juneau the Northwest Coast arts capital; the construction of the adjacent Walter Soboleff Building in 2015 was phase one. Phase three will be Kootéeyaa Deiyí (Totem Pole Trail) along the downtown Juneau waterfront. Sealaska Heritage has secured funding for 10 totem poles – Sgwaayaans and his brother will be carving two of them.