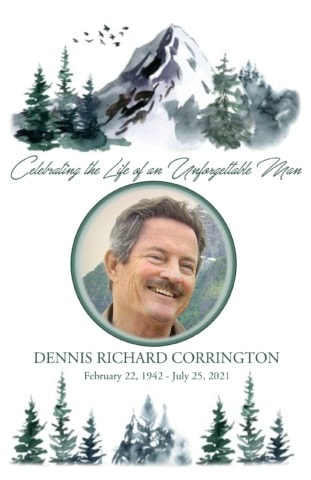 Dennis Richard Corrington was born Feb. 22, 1942 in St. Louis, Missouri to Mortimer Franklin and Dorothy Loraine (nee Shelton) Corrington. He was in the University City High School Class of 1960. He received bachelor degrees in both English and biology, and a master’s degree in secondary school administration from the University of Missouri, Columbia.

After graduation in 1966, he applied for teaching positions in the Pacific Territories, and inAlaska, promising himself his destiny would be based on the best offer that he received. As fate would have it, he made his way to Nome, Alaska, becoming first a teacher and later principal of a Native Alaskan regional boarding school.

Dennis traveled around the state to meet and recruit Native Alaskan students for Beltz Regional Boarding School. During his travels he received countless requests from Nomeresidents to bring back certain items that could not be easily purchased, since there were no roads to Nome. Unexpectedly, the requests were paid by the recipients with pieces of Native art, ivory carvings, bone carvings, scrimshawed ivory, pieces of jewelry, basketry and fur pelts. As these items began to accumulate, Dennis’s entrepreneurial spirit went into action, and he took a leap of faith that led him down a path that would change his lifeforever. In 1970 he opened the Arctic Trading Post in the heart of Nome’s downtown area. The Trading Post was a success. At that time, Nome received about 9,000 visitors a year.

While in Nome he also developed a liking for snowmobile racing and dog mushing, which led him to acquire 40 Siberian Huskies and to train for the lditarod Dog Sled Race, which heran in 1976. Having gotten into the swing of retail, he decided to take another leap of faith andmoved to Skagway, Alaska, where the visitors outnumbered Nome’s visitors by ten. This began Corrington’s fifty-year career as a retailer, real estate developer, microbrewery andhotel owner, art appraiser and part-time thespian. He built or restored and remodeled seven buildings in Skaway’s Historic District and raised the bar for all buildings that followed. His log cabin was the first new structure in Skagway in 30 years, built in 1976 by Steve Jacklitch, Oly Slettevold and himself. From the moment he landed in Skagway, he seemed toalways create a bit of a stir. Early on after the log cabin was built, a fellow merchant took issuewith the fact that he washed the windows of his store. The lady maintained that it would not do any good because the roads were still dirt at the time.

Her words were: “Dennis Corrington, if you wash your windows, then everyone will have to wash their windows!” He welcomed visitors in costume on his Pupmobile along with JeffBrady, commonly referred to as “Governor” at that time, and Janice Wrentmore who then owned the Red Onion Gift Shop and various other costumed locals. He performed in the precursor to the Days of ’98 Show which was in competition with the “Mighty MooseMelodrama.” Eventually, the Days of ’98 won out and Mighty Moose moved to Tucson,Arizona.

In 1984, his life took another turn, when he married a young widow with four children from St Louis, Missouri. For the next 38 years, they lived their dream of an ” almost-perfect” marriage, splitting the difference between St. Louis, Missouri and Skagway Dennis andNancy blended their families. Dennis’ three children and Nancy’s four, adding the bindingbonus of their eighth shared child in 1989. They found themselves to be very compatible business partners and together began their expansion into the Historic District beyond the original Fifth Avenue Store, Corrington’s Alaskan Ivory.

Dennis continued to delve into Alaskan history, developing another facet to the business by creating his second museum. This one became “The Corrington Museum of Alaskan History,” featuring the history of Alaska from prehistoric times to the present, scrimshawed (etched) on beautifully polished fossil walrus ivory tusks, and currently housed in the GoldenNorth Hotel. It is one of the best kept secrets in Skagway.

Dennis was a lifelong adventurer, entrepreneur and fun loving spirit, with a comedic flair forstorytelling. He had a zest for life second to none. He was full of passion, curiosity and had acertain finesse for the dramatic. His favorite saying was: “Life is not a dress rehearsal,” and onSunday, July 25, 2021, he took his final bow in this world at 79 years young.

For 38 years Dennis was an amazing husband, business partner and soul mate to Nancy, devoted and loving father to Scott Rehm, Chris (Jen) Rehm, Sherry Corrington, Bret (Tam) Corrington, Kevin (Katie) Enloe/Corrington, Sarah (Tommy) Denos, James (Laurie) Rehm, Susannah (Jarek) Stultz. Grandfather to 17. Great Grandfather to five. Brother, William Corrington (Maryann), Sister, Susan Alice. Uncle, and friend to many fortunate souls whocrossed his trail on his journey. May he rest in peace with the secure knowledge that he was loved deeply and forever by his wife, family and friends.

A memorial service will be held Aug. 5, 2022 at the Chilkoot Trail Outpost at 6:30 p.m. in the conference center. Anyone wishing to join in this celebration of Dennis’s life with theCorrington family is welcome. A light meal will be served after the service.