At midnight on March 18, 2023, the Skagway Port management will revert to the Municipality of Skagway (MOS), thus concluding a 55-year lease agreement with Pacific and Arctic Railway and Navigation Company (PARN).

With nine months before the end of the lease, MOS officials have voiced concern over recent communications with PARN dba White Pass. Borough Manager Brad Ryan addressed his concerns in his manager’s memo of July 21.

Ryan noted that MOS council disagrees with PARN’s interpretation and refers to Ordinance 229, Article III, section 34, “any improvements and/or chattels … shall revert to, and absolute title shall vest in, the City” when the master lease expires.”

The 1968 lease refers to Ordinance 229 in section 4 as an integral part of the lease. A 1969 lease, referring to a smaller parcel not including the waterfront, has different language. Section 4 reads, “The lessee shall have the privilege of using said lands for any purpose which is necessary or desirable to the lessee in connection with its railroad and other transportation operations.” The paragraph continues, “The lessee may place such improvements and structures thereon as are needed in such operations and the same may be removed by lessee within 30 days of the termination of this lease.”

In his report, Ryan mentions that WP&YR has suggested in communications that they “may remove certain improvements unless MOS agrees to compensate PARN for those improvements,” adding that it appears to be a comment to leverage the MOS.

Ryan said he has not received specific communication from PARN explaining precisely the costs associated with the assets in question after he and Port Director Cody met with Tory Korn of WP&YR.

“He [Korn] presented us a list of improvements PARN intends to remove at the end of the 2022 cruise ship season. The improvements include fenders, mooring dolphin caps, catwalks, over 10,000 feet of piling and more. This list does not specifically identify the location of each improvement, instead it simply lists the quantity to be removed from the Broadway and Ore Docks,” wrote Ryan.

“It is concerning to get a vague list in which PARN has still not identified the exact improvements it is seeking to remove only nine months before the next cruise ship season starts. If WP&YR does remove the pilings and catwalks from the Broadway and Ore Docks as Mr. Korn stated in our meeting, MOS will not be able to berth ships at those facilities in 2023 until the improvements are replaced,” Ryan wrote.

Ryan said he did receive a document of photos from Bob Berto, president of WP&YR, but the location and costs were not included. He replied with a request for costs and specific location of the assets in the photos.

A White Pass representative says Berto is scheduled to meet with MOS officials on Aug. 29 or 30 in Skagway. 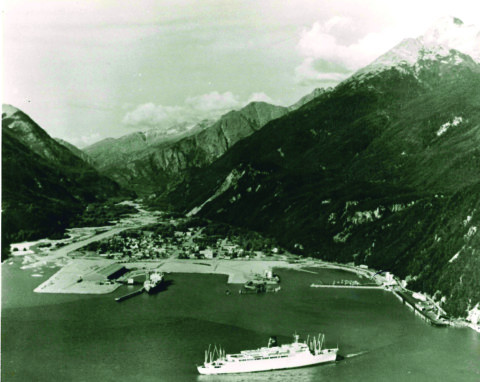 “I think ultimately, what White Pass would like to see is some sort of a transition that recognizes the investment that was there, the utility of the community and be able to transition that in some form … while retaining the rights to the assets that we put in there. And I think, you know, we’re, we’re looking to work with the city on that. I think there’s a lot more discussion to come here in the coming weeks on this,”  said Tyler Rose, Executive Director of Human Resources & Strategic Planning for WP&YR.

“We understand what it means to the community and are looking to find that middle ground where we maintain the interest in the assets, because there is value to also be able to transition and not disrupt traffic. There is a balance in there. We just have to sit down with the municipality and figure out how we do that,” Rose said.

Signed in 1968, the MOS and WP&YR agreement specified that the lessee (PARN) “shall have the privilege of dredging a deep water mooring basin for vessels and may make any and all types of excavations on the premises.”

The lease covers an area from what is now the east side of Broadway Dock, up to the current railroad spur tracks to the north, the Ore Dock, the Cruise Lines of Alaska Agency building and the Ore terminal. Photos attached to this story show the port during the process of improvement.

“So it’s a large parcel and when it was originally leased it was tidelands; the dredge spoils, the uplands were wiped out through dredging,” Rose said.

Photos show the tideland reaching as far inland as First and Second avenues.

In addition to dredging, removal of old structures and creating fill, the 1968 lease stipulated that PARN was to begin construction with expenditures of at least $500,000 in the first six months on at least one of the following: a spur railroad line, a bulk mineral storage and handling facility, a dock and dolphins or a deep water basin at the face of the dock.  All four of those facilities were directed to be completed within two years at a cost of no less than $2 million.

Since then, PARN, doing business as White Pass, built the Ore Dock, constructed the ship loader, the railroad spur to Ore Dock and Broadway Dock. Tyler said other lessees such as Alaska Industrial Development and Export Authority, Alaska Marine Lines, Petro Marine and Temsco Helicopters also contributed to the formation of the current port.

Tyler says he hasn’t yet been involved in the discussions regarding asset removal or compensation. He is aware of community concern over the port being ready for the 2023 season.

Ryan says the goal is to be ready for the 2023 season.

“This isn’t a negotiation,” he said.

In 2015, Skagway residents voted down a newly negotiated lease agreement with PARN that would have reduced the WP&YR leased area from 78 acres to 2.7 acres, giving management of the area to Skagway for port development, making way for a proposed $23 million development.

The original lease cost PARN $3,600 annually. WP&YR currently pays $127,200 a year for the lease in addition to paying taxes to the MOS based on the current market value of the area.

Editors Note: This article has been update to clarify that the 1969 lease covers a much smaller area of land that does not include the waterfront projects.